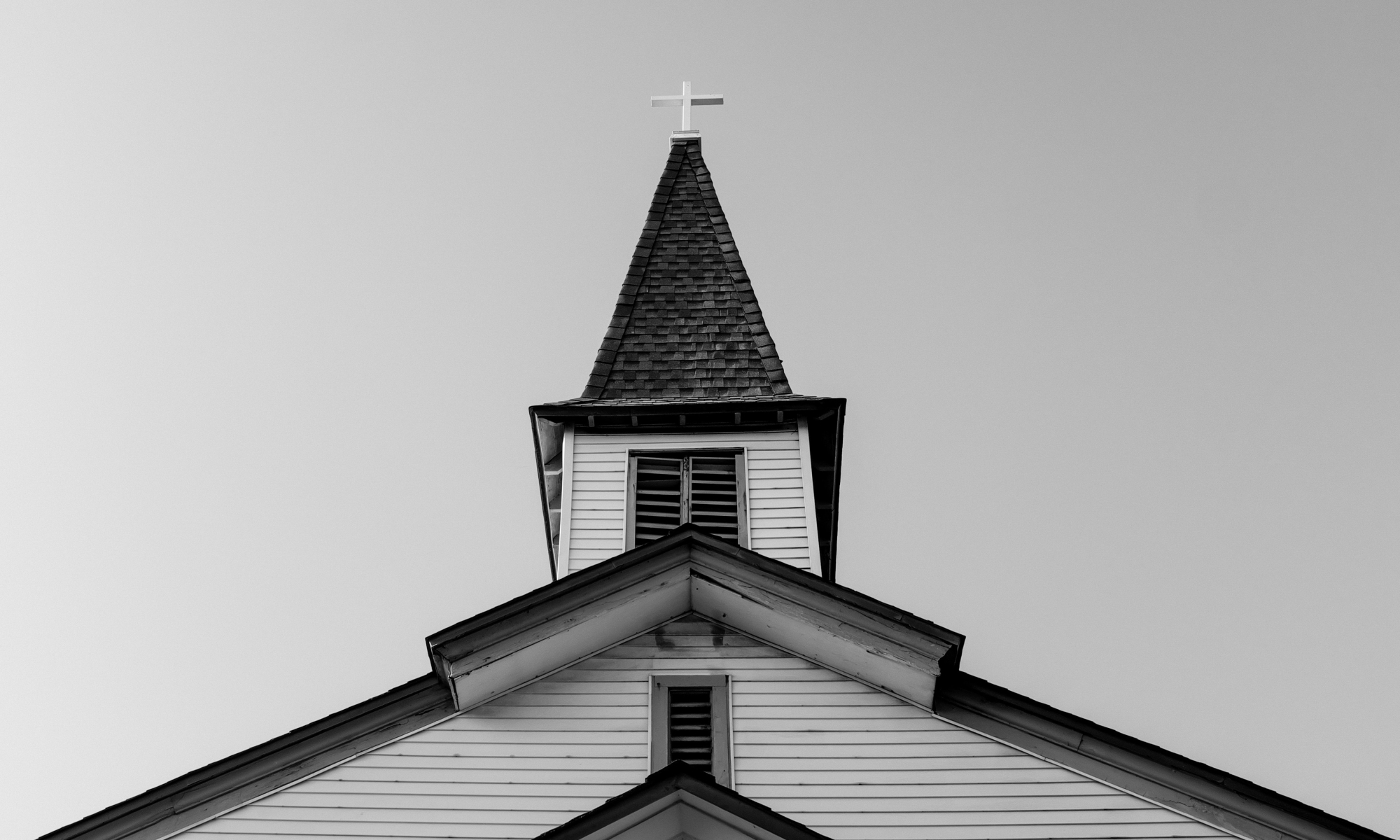 I believe the church in America is currently undergoing two historic and seismic shifts that will forever alter the spiritual landscape of our country:

Shift #1 – Church Planting in America is at an all-time high.

There has been a recent explosion of church planting in the United States over the last twenty years. In fact, for the first time in decades more new churches are being planted than closed in America. According to a Lifeway Research study, 3700 churches closed their doors in 2014, but at least 4000 new churches were planted!  However, while that is good news, two things that threaten to slow down these church planting trends are:

I live in Raleigh, North Carolina where every Middle or High School in our county (Wake County) has a church plant meeting in it.  In addition, many public schools and communities are becoming increasingly hostile towards churches renting community buildings.

Shift #2 – Established Churches are closing at a staggering & increasing rate.

Half of all churches in the United States did not add any new members in the last two years. 80% of all churches are either declining or not growing. Even worse, 10% of all churches in America will die in the next five years according to Mark Clifton, Senior Director of Replanting with the North American Mission Board (NAMB). Self-revitalization for most of these dying churches is virtually impossible and their closures are imminent. According to Clifton’s research into Southern Baptist Churches, the largest protestant denomination in the United States, 5000 Southern Baptist Churches in America will close in the next five years. While, the Southern Baptist Convention is planting 1200 new churches a year, they are also seeing 900 churches close annually and that pace appears to only be increasing. 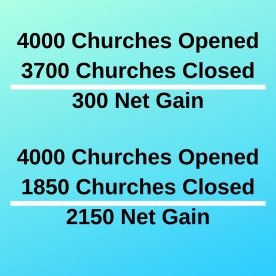 What if we could see fewer churches close their doors through partnering a declining church with a growing church or multisite church looking to start a new location in that community?  According to a Lifeway Research study, in 2014 while we planted 4000 new churches in America, there was only a net gain of 300 churches because so many churches closed their doors.  What if revitalization mergers could cut in half the number of churches who close their doors? Instead of gaining only 300 total churches in 2014 we would have seen a net gain of 2150 churches in America!

What if we could pair these new prevailing churches with faithful legacy churches experiencing rapid decline and underutilized facilities?

What if, through merging together, these “legacy churches” could once again see dramatic Kingdom growth resulting in communities full of lives changed by the gospel of Jesus Christ?

Traditionally, declining churches wait to make drastic changes until there are only a handful of people left and they are forced to close the doors. Once the declining church closes their doors, they turn the keys of their church over to their denomination or another ministry for the property to be sold or repurposed. The remaining faithful members are left homeless with a feeling of failure.

What if there was another way?

Thom Rainer in his article “3 types of church revitalization” succinctly describes both the revitalization challenge and pathways forward:

“There are two foundational issues that must be addressed in church revitalization. First, the church must have the right leaders on board. Second, the behavioral patterns of the church members must change. No infusion of methodologies or innovations can take place until these two issues are addressed. Such is the reason most revitalizations fail, and only a few succeed. Let’s look at that reality in light of three approaches.

Three Types of Church Revitalization: Most church revitalization attempts use the least effective approach. There, of course, are good reasons for that reality. That will be apparent in the descriptions below.

Acquisitional revitalization. This approach is both radical and largely successful. Another church acquires the existing church in need of revitalization. Sometimes the doors of the existing church are closed for a season. The church then reopens, possibly with a new name, but definitely with new leaders. The success rate is high because both foundational issues are addressed: leaders and behaviors. Estimated success rate: 90%.

Covenantal revitalization. The second approach is relatively new, but one for which I am becoming a strong advocate. The existing church, led by an objective person (often an outsider), agrees to make some significant changes. The leadership actually signs a covenant, and the congregation affirms the covenant. In other words, the existing members and leaders agree to behavioral changes. Success is somewhat high because one of the two foundational issues is addressed: behaviors. Estimated success rate: 40%.

Organic revitalization. This approach is the most common taken today. The church may try new methodologies and approaches. But resistance is common because most of the members really don’t want change. The church addresses symptoms rather than causes. Some members would rather see the church die than change. Failure rates are high because neither of the two foundational issues is addressed. Estimated success rate: 2%”.

In his article, Rainer suggests that the success rate of merger or “Acquisitional” revitalization is around 90%! Is it just me or is that figure astounding? Especially when contrasted with the 2% success rate of Organic Revitalization! The problem, however, is that few dying churches are aware this possibility is a viable option; or they are afraid because it seems so drastic.

What if we could change that?

What if we could raise awareness of the Kingdom effectiveness of this merger model and tell stories of churches and communities who have been revitalized and transformed for the Glory of God with consistent success? What if we could help make this model the new norm for thousands of dying churches?

Not only do I believe it is possible, we have experienced it multiple times.

Let me share two of those examples with you:

What if, through this model, we could keep thousands of churches from dying and simultaneously accelerate Kingdom expansion?

After much reflection on our multiple revitalization mergers, I would like to offer 8 common factors we believe could offer a possible recipe for revitalization success: 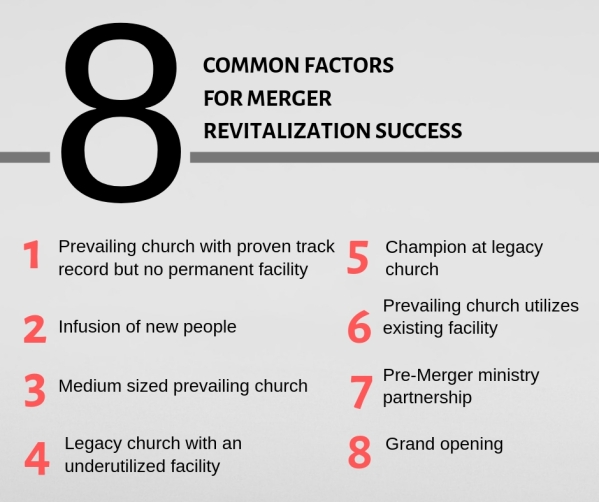 We have found that a church or multisite location that is a few years old with proven effectiveness, but no permanent facility, is the ideal candidate to partner with a legacy church.

When the prevailing church has people to immediately infuse into the legacy church it brings immediate life into the newly merged church and infuses an outward focused church culture.

Most large mega churches already have permanent facilities and are not interested in utilizing the facilities of smaller churches with medium sized (100-250 seat) auditoriums. However, medium sized churches without a facility will view this as a great Kingdom opportunity and are motivated to ensure merger success.

In our revitalization mergers, the existing legacy churches were no longer reaching the community it was originally planted to reach and had declined in attendance over numerous years. However, due to the faithfulness of previous generations, they had underutilized facilities that were mostly paid for and could be immediately put to use as Kingdom tools to impact the city.

In our experiences, each legacy church had someone internally committed to championing the replant effort. In one of our examples, this champion was the existing pastor and in the other, the champion was an interim pastor. In the absence of a pastor, the champion could also potentially be an influential elder, deacon, or the leader of a local association or network.

We have seen that important relationships and trust are formed when two churches have an opportunity to do ministry together before a merger. In our second revitalization merger, we jointly started a food pantry at the legacy church. The ministry partnership gives a great opportunity to serve the community side-by-side to build relationship and trust.

In all of our replant/merger efforts we held a Grand Opening to the community with a significant marketing effort. We have consistently found this strategy to be very effective to get the word out to the community that God is doing something new!

Whether you are a member of a declining church, prevailing church, church planting or revitalization group, I pray our journey offers you hope and another option to pray through as you seek to be used by Jesus to build his church!

Matthew 16:18 “I will build my church, and the gates of Hades will not overcome it.”